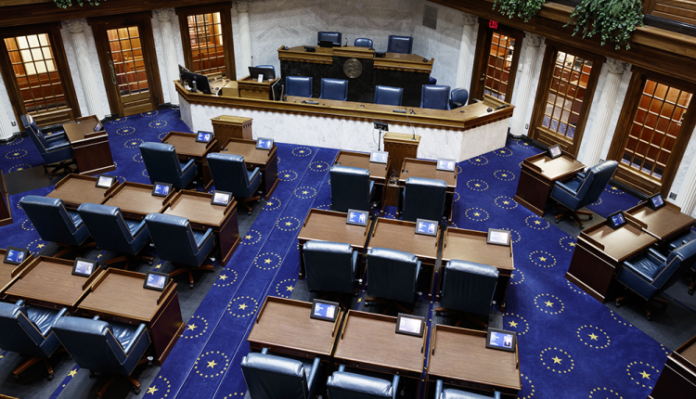 Legislation restricting the identification of juveniles, either those facing a petition alleging juvenile delinquency or those who are victims of crime, may be filed for consideration by the Indiana General Assembly during its 2022 session.

The Indiana Public Defenders Council and Accelerate Indiana Municipalities (AIM) informed HSPA of their interest in this diminishment of information that would be made available by Indiana courts and law enforcement agencies.

Current law on the transparency of juvenile-involved criminal (both victims and alleged perpetrators) cases can be traced to recommendations from the Indiana Juvenile Code and Youth Gang Study Commission following two years of monthly meetings. Then-Gov. Evan Bayh convened the Commission “in recognition that the current juvenile justice system in Indiana is not working – at least not as well as it should,” according to then-Marion County Prosecutor Jeff Modisett, who was a Commission member.

The recommendations presented as legislation to the Indiana General Assembly in 1994 was approved by the Commission on a 13-1 vote. Jon DeGuillo, Lake County Prosecutor chaired the Commission.

Old law gave juvenile court judges the discretion to close proceedings and thus the records. Modisett said 99 percent of juvenile delinquency cases in Marion County were closed to the public under that system.

With a closed system, a community didn’t have the opportunity to better understand the juvenile justice system and impact of juvenile crime. HSPA executive director and general counsel Steve Key recalls there was a general concern that juvenile crime had grown more violent and there were questions as to whether the system was adequately addressing the more violent juvenile offenders.

The changes did take into account the privacy and protection of child witnesses/victims if the juvenile delinquency charge concerned:

1. Matters of a sexual nature; and

Otherwise, there was no consideration to make blanket restrictions on information provided by the police or courts concerning crime victims, whether adult or children.

Part of that reasoning goes to the Constitution’s 6th amendment right for the accused to be informed of the nature and cause of the accusation and to be confronted with the witnesses against him/her.

While discovery does bring that information before the accused when the case moves forward, making information public about the victim to the public serves several purposes:

1. By identifying the victim and accused, it alerts the public to the event in question and can bring forward other witnesses who may bolster the case for the accused as well as the prosecution.

2. It allows the community to offer support to the victim’s family as friends, fellow employees, members of the same congregation or neighbors who may not even have known the victim or family. We’ve all seen donation jars in businesses to help a family with medical bills or burial costs.

3. Putting a name to the victim helps a community humanize the crime by making that victim a person, not a generic 14-year-old girl. Desensitizing violent crimes doesn’t serve to galvanize a community to demand its government to take action to prevent repeat incidents. There are multiple examples of legislation that bears the name of a child whose victimization stirred legislators to change or create law.

4. From a practical standpoint, making a change to redact the names of underage crime victims will add a burden to law enforcement and the courts. For example, accident reports are public records required to be made available to the public. With this proposed change, police officers would have to create one version of the report for the Indiana State Police and a second redacted version for the public if the driver of the vehicle faced any criminal/juvenile delinquency charges if there were underage passengers in the vehicle.

Additionally, it is worth noting that when HSPA asked what prompted AIM to propose this legislation, it pointed to one example – the release of the name of a murdered child in South Bend. HSPA would argue that a community should know when a child has been murdered. If this is the only instance of a problem, we would argue that it shouldn’t prompt action without proper examination.

If the legislature believes current law on the transparency of criminal and juvenile delinquency hearings needs to be changed, and it may after nearly three decades, HSPA would suggest the same thoughtful effort by given by the various stakeholders in the process as occurred in 1992 through 1993.

If circumstances have changed since the law was changed on the recommendation by the Juvenile Code and Gang Study Commission, it would be perfectly appropriate for a new commission to be appointed to examine the process including what level of transparency the legislature would want to apply to the criminal and juvenile delinquency process.