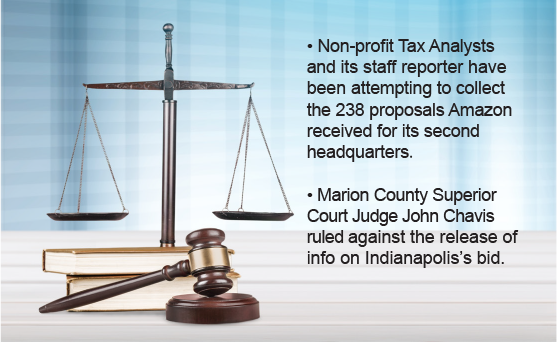 The Hoosier State Press Association Foundation will file an amicus brief in the Indiana Court of Appeals to support Tax Analysts attempt to secure the details of the Indiana Economic Development Corporation/Indianapolis bid for Amazon’s second headquarters.

Margaret Christensen of Dentons Bingham Greenebaum in Indianapolis will draft the brief for the HSPA Foundation.

HSPA Executive Director and General Counsel Steve Key believes Marion County Superior Court Judge John Chavis interpreted the relevant statute to have an intent that was not intended when the language was passed by the Indiana General Assembly in 2005.

For background on this issue, read the June Key Points column here.

Judge Chavis ruled on April 24 against Tax Analysts, a non-profit organization in Washington, D.C., and its staff reporter Lauren Loricchio, who have been attempting to collect the 238 proposals that Amazon received. According to Indianapolis Star columnist James Briggs, the Indianapolis bid is becoming an “increasingly rare holdout.”

The dispute centered on language in the Access to Public Records specifically inserted for the new IEDC in the 2005 General Assembly. H.E.A 1003 was authored by then Rep. Randy Borror, R-Fort Wayne. The bill shifted the state’s economic development efforts to the public-private entity.

Judge Chavis’ ruling focused on language that was part of Borror’s introduced version of H.B. 1003. The language allowed the IEDC to keep records related to negotiations between IEDC and industrial, research or commercial prospects confidential at the discretion of the entity if the records were created while negotiations were in progress.

Judge Chavis ruled on April 24 against Tax Analysts, a non-profit organization in Washington, D.C., and its staff reporter Lauren Loricchio, who have been attempting to collect the 238 proposals that Amazon received. According to Indianapolis Star columnist James Briggs, the Indianapolis bid is becoming an “increasingly rare holdout.”

The next paragraph stated that “the terms of the final offer of public financial resources communicated by the corporation to an industrial, a research, or a commercial prospect shall be available for inspection and copying [under the Access to Public Records Act] after negotiations with that prospect have terminated.”

With negotiation records allowed to be kept secret, Borror included language requiring the IEDC to certify that the disclosed record “accurately and completely represents the terms of the final offer.” Key says the language would make IEDC officials think twice about withholding any of the terms in that final offer from the public because they would then be consciously violating the law.

There was no dispute before Judge Chavis that IEDC and Indianapolis submitted a response to Amazon’s request for proposals and that response included dollar amounts to which Indianapolis and Indiana would commit to land the Amazon HQ2 and a general overview of incentives, The response included the total amount of EDGE tax credits the state would commit to granting over a 10-year period. The response included commitments from the Skills Enhancement Fund for training of new Amazon employees, an Industrial Development Grant for infrastructure improvements, and detailed legislative initiatives that could be pursued to assist in the creation of the headquarters.

The response led Amazon to announce that Indianapolis had made the cut to 20 finalists for the HQ2. Amazon officials visited Indianapolis in March 2018 to gather more information on the proposal, but that was the last Indianapolis heard from Amazon. Amazon announced on Nov. 13, 2018 that it would split HQ2 between New York and Arlington, Virginia, and Nashville, Tennessee, as a new logistics and transportation hub.

Lorrichio made her records request for Tax Analysts in January of 2019. In March, Chris Cotterill, COO for the IEDC, denied the request, saying that there was no final offer made – that its initial offering of incentives could not be considered a final offer. Luke Britt, Indiana’s Public Access Counselor, declined to conclude that IEDC had violated the state’s public records law without the ability to see the document in question. Tax Analysts then filed the lawsuit as allowed under APRA.

In the case of Amazon, the secrecy would cover what is estimated to be a commitment of at least $1.5 billion. That’s the amount that was offered by the IEDC and Gary in that city’s proposal to Amazon, which Tax Analysts obtained from the northwest Indiana city.

Judge Chavis did determine that “final offer” does mean the last offer made by IEDC to a prospect.” The proposal was the last in a process as Indianapolis’ negotiations ended with Amazon. … Giving the words [in the statute] their plain, ordinary, and usual meanings, Indianapolis’ proposal appears to meet the dictionary definition of a ‘final offer.’”

That should have been the winner for Tax Analysts, Key wrote last month in the Indiana Publisher, but Chavis didn’t stop there.

The judge determined that if the IEDC didn’t certify the accuracy and completeness of the information, then the offer wouldn’t qualify as a final offer that would be required to be released to the public upon request.

“If the terms of a final offer are not certified for accuracy and completeness, then statutorily under I.C. 5-14-3-4-(b)(5)(C), it cannot be considered a final offer, Otherwise, Clause (C) would have no meaning whatsoever,” Chavis wrote.

Key says the trial court ruling gives the IEDC the ability to never release a final offer by merely refusing to certify the last offer made. This would gut the intention of the legislature to allow the public to know what the IEDC was committed to providing a commercial prospect.

In the case of Amazon, the secrecy would cover what is estimated to be a commitment of at least $1.5 billion. That’s the amount that was offered by the IEDC and Gary in that city’s proposal to Amazon, which Tax Analysts obtained from the northwest Indiana city.

Time to debunk myth that public notices are a financial burden