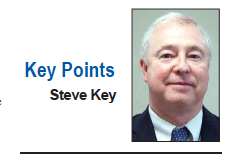 The Foundation launched a promotional advertising campaign extolling the value of newspapers to their communities. The second wave of ads are featured on the front page of this issue of The Indiana Publisher.

When there’s a lot of horse manure being spread about the future of newspapers, I hope our members are making the effort to remind their communities what newspapers do and what the loss would be if the newspaper ceases to exist.

Newspapers must continue in 2019 to educate readers on the value of public notice advertising because the bureaucrats in government will continue their efforts to eliminate the publication requirement.

Working with Rep. Mike Karickhoff, R-Kokomo, HSPA successfully amended the Access to Public Records Act to allow Hoosiers to obtain public records maintained electronically in that format via email with no copying cost.

HSPA’s Midwest Advertising Placements (MAP) service placed more than $850,000 in advertising in newspapers this year. That’s advertising our members didn’t have to sell, allowing staff to sell other advertising for their newspapers.

Through an agreement with the state Board of Accounts, HSPA shares reports referred to county prosecutors for action to the newspapers in those counties. On Wednesday, we sent a report to the Madison Courier concerning a former Jefferson County jail commander and $94,600 not properly deposited.

Through our HSPAInfo.net program, more than 90 Indiana newspapers share content, so that editors can build statewide news pages or briefs column, localize stories originating in other newspapers or borrow ideas that can be assigned to their reporters.

Through the Foundation’s Eugene S. Pulliam Internship Program, some of the best collegiate journalists get the opportunity to work at Indiana newspapers for 10 weeks during the summer. The students collect experience and clips and the newspapers benefit from the presence of these enthusiastic interns

Newspapers have the opportunity to magnify classified revenue from local customers by upselling in HSPA’s statewide programs – Indiana Classified Advertising Network (ICAN), Daily ICANs, and the Power of 2 program. And the person who makes the sale also gets a check from HSPA for their efforts.

2018 saw the first recipient of the Nina Mason Pulliam Charitable Trust’s award for environmental reporting. In addition to the glass award and trip to the Society of Environmental Journalists conference in Flint, Michigan, Seth Slabaugh of the Star Press in Muncie, received a $1,000 check at this year’s Newsroom Seminar.

Through a grant of the Foundation, Indiana newspapers have the opportunity to run health news columns written by Trudy Lieberman. This gives them expertise on issues that most papers couldn’t find in-house.

Newspapers also got the answers to 112 legal questions posed just in the last two months to HSPA, which is one of four state press associations that has an attorney on staff ready to assist member newspapers.

We also crowned the best daily and weekly newspapers for the year – the South Bend Tribune and The Herald-Tribune in Batesville received the Blue Ribbon Award in the Better Newspaper Contest in September.

All in all – a productive year for the Association and Foundation.

Requirements must be met to qualify as periodical publication