The traditional mark of the end of a newspaper story.

30 – The number of legislative sessions I’ve lobbied on behalf of the Hoosier State Press Association with the last 12 as executive director and general counsel. It’s been a good ride.

During my stint with HSPA, we’ve worked on legislation that:

• Opened up the juvenile courts to public scrutiny;
• Permanently created the position of Public Access Counselor;
• Made it clear that email falls under the Access to Public Records Act (Some legislators wanted to treat it like phone calls not subject to public inspection);
• Created a mechanism for the public to obtain copies of police body camera video; and
• Expanded the Open Door Law to give the public the right to speak at school board meetings (A concept that can grow to include all public meetings in Indiana). 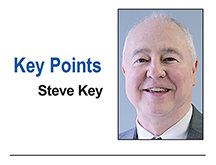 HSPA also has fought the seemingly unending battle to preserve the concept of public notice advertising as the third pillar of government accountability. I’m not sure there’s been a legislative session that didn’t have at least one bill filed to diminish the publication requirement.

That goes back to the day in January of 1993 when I walked over to the Statehouse on my first day as a legislative intern with then general counsel and executive director Dick Cardwell, who hired me. And that’s been the situation during the time Cardwell’s successor, David Stamps, mentored me as we’ve experienced the upheaval in the newspaper industry.

The business model that served us for more than a century has fractured. During the pandemic, Indiana has seen more than a dozen newspapers close their doors.

It’s been my privilege to work with publishers and their staff members to help them serve Hoosiers as a vital piece of what makes local democracy work.

Conversely, the demand for local news has never been greater. In the vast majority of Indiana’s 92 counties, it was the local newspaper that informed the community of how COVID-19 was impacting their lives. Newspapers continue to serve as the eyes and ears of the public – attending local government meetings to report on what is being done with taxpayer dollars; sorting through public records to uncover mismanagement or possibly corrupt behavior.

A few years ago, a group of Northwestern and Notre Dame university economists statistically showed that communities without a strong local newspaper presence saw the cost of the government be greater.

Newspapers continue to weave together the fabric of their communities with stories about life – high school sports, the county fair, church activities, the work of charitable organizations, festivals, the birth of children and obituaries.

I’ve always felt a city or town that loses its newspaper loses its voice.
It’s been my privilege to work with publishers and their staff members to help them serve Hoosiers as a vital piece of what makes local democracy work. I often tell people how lucky I’ve been to do a job that not only do I enjoy, but I believe can make a difference.

I started my journalistic career 45 years ago as a sports writer for the Quincy Herald-Whig in 1977. It’s a good time to turn the job over to a new generation of leadership. I’m confident that Amelia McClure, with the support of Pam Wells-Lego and Shawn Goldsby, will do a tremendous job serving Indiana newspapers as the new executive director and general counsel.

Let me finish by urging everyone involved with Indiana’s newspapers to not lose sight of how important you are to your communities. Continue to seek out the truth, even when it’s uncomfortable, and respect the impact your stories have on those involved.

This is my – 30 – as executive director and general counsel.