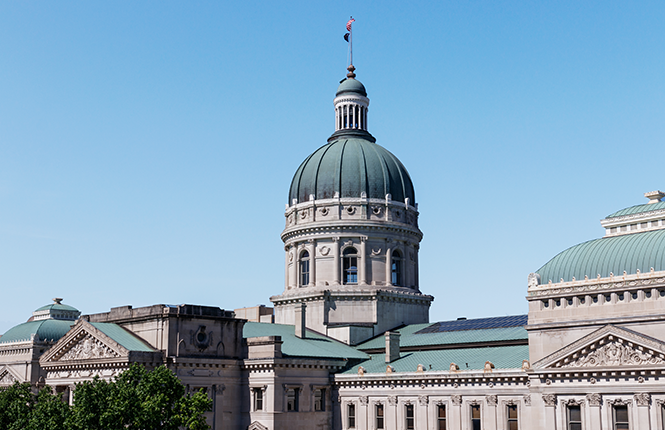 The three bills that would change how members of governing bodies of local government units can participate in meeting electronically are moving forward in the General Assembly. HSPA has been working with all three authors to improve the language.

S.B. 369, authored by Sen. Linda Rogers, R-Granger, and H.B. 1437, authored by Rep. Cook, R-Cicero, would allow members official governing bodies to be counted as part of a meeting quorum and partake of votes while participating electronically.

Both bills were amended to require 50 percent of the governing body to be physically present at meetings – answering a concern raised by HSPA.
HSPA supports the efforts of Sen. Rogers and Rep. Cook while continuing to work on minor tweaks to the language in both bills.

Prior to the pandemic, local board members could participate electronically in discussion, but could not vote or be counted as present.
S.B. 68, authored by Sen. Stacey Donato, R-Logansport. This bill would allow conservancy district

board to have members participate in meetings electronically and count as part of the quorum and vote. HSPA reached out to Sen. Donato on this bill to ensure it contains appropriate guardrails to preserve the public’s ability to hold these districts accountable.

Rep. Doug Miller, R-Elkhart, hasn’t revealed his intent with S.B. 332, which he is sponsoring for author Sen. Jim Buck, R-Kokomo.

Sen. Buck’s bill would impact all public notices that currently require publication more than once in local newspapers. Those notice requirements would change to once in print and the subsequent notices would be posted on government websites.

Rep. Miller’s options may range from stripping the bill and inserting language from his H.B. 1498, which died on the House floor, to changing the bill to call for an interim study committee to look at the state’s public notice policy.

H.B. 1498 would have moved all public notices from newspaper publication to government website posting. Miller’s bill died in the House after failing to pass due to a lack of constitutional majority with a 46-44 vote.

HSPA has pledged to the leaders of all four legislative caucuses that it intends to propose a public notice policy of the future this summer for their review. HSPA hopes to file a bill in the 2022 Indiana General Assembly if the leaders are satisfied with our industry’s effort.

In its current form, the changes made by S.B. 332 would go into effect on July 1, six months before the 2022 legislative session where HSPA hopes to modernize Indiana’s policy.

S.B. 332 is awaiting a hearing in the House Government and Regulatory Reform Committee, which is chaired by Miller.

S.B. 409, authored by Sen. Rick Niemeyer, R-Lowell, would alter the requirements of the annual township financial report. Sen. Niemeyer wants to eliminate from the abstract the listing of all payments made by townships. This is a requirement not shared by any other public agency that publishes an annual report and can create additional cost for townships that have more activity and thus more payments to the list.

With Niemeyer amending the original bill to accomplish his stated goal, HSPA said it could support the bill if Niemeyer amended the bill to match his intent. HSPA couldn’t argue for a township specific requirement different from all other local government units.

S.B. 188, authored by Sen. Eric Koch, R-Bedford, would have eliminated the publication of unclaimed property lists by the state Attorney General in local newspapers. The original version of the bill would have had the publication replaced by a small twice-a-year notice of the AG’s contact information for the program. The language came from a national uniform code commission model.

HSPA expressed its opposition to the change, pointing out the success of the publication of the lists. Amy Hendrix, director of unclaimed property in the AG’s office, testified in committee that Indiana returns 64% of the unclaimed property back to Hoosiers, while the national average is only 48%.

The bill was heard March 16 in the House Judiciary Committee, chaired by Rep. Jerry Torr, R-Carmel. The sponsor is Rep. John Young, R-Franklin.
Sen. Koch offered an amendment to S.B. 188 that preserves the publication requirement while the bill was in its Senate committee.

HSPA had no success in preserving the public notices either with Rep. Eberhart, or sponsor Sen. Sue Glick, R-LaGrange. HSPA expects that the DNR bill will be passed with the offending language by the General Assembly.

A bill reducing what information Hoosiers could obtain about the state’s economic development information is moving unabated through the General Assembly.

H.B. 1418, authored by Rep. Sharon Negele, R-Attica, is the Indiana Economic Development Commission bill. Current law requires the IEDC to make available information on completed deals and details on the final offer when negotiations end between the IEDC and a prospect. H.B. 1418 would eliminate the requirement to make public any information on deals that are not consummated.

This bill also would circumvent a lawsuit between a non-profit Washington, D.C., entity – Tax Analysts – and the IEDC over this issue. Tax Analysts is trying to collect information on the 238 cities who were trying to land the Amazon 2 headquarters. The cities of Gary and Indianapolis were among those in the competition. Tax Analysts was able to determine that the Gary bid included $1.5 billion in incentives. IEDC declined to make available any information about the Indianapolis bid – arguing there wasn’t a “final offer” made. The Indiana Court of Appeals agreed, but Tax Analysts plans to appeal to the Indiana Supreme Court. (The HSPA Foundation filed an amicus brief on Tax Analysts’ behalf in the Court of Appeals case.)

The case offers an insight for the public to know what deals are being offered, even if the deal isn’t closed. First, the amount of Gary’s bid – $1.5 billion – might raise questions as to whether the city and state were offering too much for the prize of Amazon’s second headquarters. The value of the incentives equaled 8% of the state-funded portion of Indiana’s 2016 budget. It could be a bargain based on ancillary economic development expected to follow Amazon’s move or some might feel it’s too much compared to the benefits of winning the bid.

Because IEDC refuses to release the Indianapolis/IEDC number, it also leaves unanswered whether the IEDC incentives offered were greater for Indianapolis than what it was willing to do for Gary. Lake County residents might want to know why if it appears IEDC was favoring one Indiana city over another.

Since Tax Analysts has been able to obtain offers for 124 out of the 238 total proposals to Amazon, the release of such information desired to be kept secret by the IEDC arguably does not put Indiana at a competitive disadvantage to other states. The release would allow someone to compare Indiana’s offer to other states to consider whether Indiana is deficient in its economic development efforts or proven to be highly competitive with other states.

H.B. 1418 was scheduled for a hearing Thursday (March 18) in the Senate Commerce and Technology Committee, chaired by Sen. Chip Perfect, R-Lawrenceburg. The bill’s sponsor is Sen. Jon Ford, R-Terre Haute.

S.B. 78, authored by Sen. Mike Crider, R-Greenfield, would allow hospital police departments to expand their jurisdiction beyond hospital property. HSPA reached out to Sen. Crider to request his bill address the issue that private hospitals have no reporting requirements on their response to potential crimes or traffic accidents, unlike all other police departments.

HSPA offered language to Julie Halbig, representing the Indiana Hospital Association and Kevin Mahan, who runs the Community Hospitals police department. Halbig made a counter proposal that would only cover arrests. This language was amended into

S.B. 78 during its hearing in the Senate Homeland Security and Transportation Committee, chaired by Sen. Crider.

HSPA still hopes to address the hole in the bill – no reporting of crime reports when no arrest has been made. Steve Key, HSPA executive director and general counsel raised the issue March 16 during S.B. 78’s hearing before the House Veterans Affairs and Public Safety Committee, chaired by Rep. Randy Frye, R-Greensburg. The bill’s sponsor is Rep. Mike Karickhoff, R-Kokomo.

Karickhoff told HSPA March 17 that he was working on an amendment that hopefully will improve S.B. 78.

S.B. 110, authored by Sen. Eddie Melton, D-Gary, would create a law enforcement misconduct data base. HSPA suggested an amendment to strengthen language outlining what information should be included in the data base when an officer has been terminated, demoted or suspended without pay – specifically to clarify what “factual basis” should include as to documentation supporting a disciplinary action.

The misconduct data base was removed from the bill in the Senate, mooting HSPA’s suggestion.